A Romantic Getaway in Illinois

Doc’s Lakeside Cabin was built in 2012 on a private 6 acre Lake. Surrounded by beautiful hills and the Shawnee National Forest Trail of Tears, we are family owned and operated in Jonesboro, Illinois.

The inspiration for the location and name came from my grandfather “Doc” who loved the outdoors.
Many times he would sit on his porch swing, point with his tobacco pipe in hand across the Lake and say “that would be a great place for a lil cabin.”

As our family surrounds this peaceful getaway cabin we want our guest to feel “they are family”.

My grandfather “Doc” worked as an iron worker in the northern part of Illinois and would come here to hunt and fish.  Grandpa was the first to have the vision of this area, he wanted to build an “A” frame house, however at first the bank did not share the same vision and it almost did not come to pass. Finally in 1969 the “A” frame was built along with a small pond stocked with different types of fish, including some albino catfish.  Grandpa and Grandma Marge would feed them every day and bluegill would come to the top of the water, and once in awhile we could get a glimpse of those albinos’. Grandpa was an outdoorsman who would coon hunt on “John Henry” his mule and loved to turkey and deer hunt, dig for ginseng and to fish.  He and grandma owned and operated Marge’s Country Kitchen/Doc’s Place.  It was the only place in town that you might have the same person bring your food as well as get some live bait for fishing.  As time went on, many hunting and fishing memories were made.  Doc loved to sit out on his porch in the A frame house and smoke his pipe.  He would look out across the lake and say “That is a perfect place for a little cabin.”  He was a “corker” and loved this lake and this land, so we named this cabin in honor of my Grandpa.  “Doc’s Lakeside Cabin”

The lake was built in the early 1990’s, when my grandmother sold her stock in Johnson & Johnson.  It was always their dream to build one on this property that has been in the family now for 6 generations.   My Great Grandfather had a cabin here many years ago, which would now be under about 24 feet of water, so we thought it would only be fitting to build a cabin back on the land and invite others to enjoy this area as we have for so long.  We love that we are in the backyard of the Shawnee National Forest and the “trail of tears”.

My father who carves totem poles has one on the point, across the lake, as well as a memorial “Trail of Tears Totem Pole “which is more public and visible at the Vienna Park. He also has built a little red cabin nestled in the woods, where he enjoys his hobbies and his miniature burro “Burrito”.  Burrito follows dad around the yard and comes up on his porch wanting something to eat, acting more like a dog than a burro.

We hope you will enjoy watching the ducks, you may also see a few turtles peddling around the lake.  Our newest arrival is a beaver; she is normally spotted early of a morning or at sunset.  The lake has tons of fish and even a few snakes, so watch your step.  One year, Grandpa Doc caught a 20 pound catfish out of this lake (pic is at bottom of this page.  My little nephew fishes several times a week trying to beat that record.

This lake is special to us, we hope you enjoy it, and come back again. 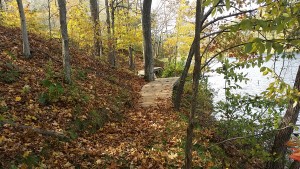